The Jock Law Trophy is presented to the Wealdstone player who has received the highest number of votes in a ballot by members of the Supporters Club who they consider to have consistently shown good form throughout the season.

It is presented at the end of every football season and was first awarded in the 1969-70 season to goalkeeper, Andy Williams.

The trophy was named after Tom “Jock” Law who was one of the founding members of the Supporters Club. He was the first chairman holding the office from February 1958 to January 1965 and gave many years of sterling service to the Supporters Club and the main football club.

The list of winners of the Jock Law Trophy are shown below: 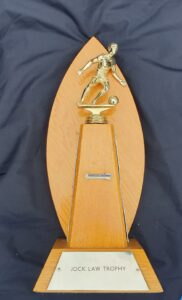