The Supporters Club is proud of its history of organising its walks, aimed at raising funds for, and the profile of, Wealdstone FC.

The Supporters Club held its first sponsored walk in 1992 when over 80 supporters walked the 16 miles from Harrow to see an away game against Fisher Athletic in South East London, raising over £7,000. More below.

In 2001 under the guidance of then committee members, Graham Jones and Paul Fruin, the sponsored walks took on a new life. The Stones to Rocks Walk, in March 2001 saw a group of Wealdstone supporters take five days off work to walk the 60 miles from Leatherhead to arrive in Bognor Regis ready for the Stones game on the following weekend.

2003 saw the Strolling Stones Walk to Oxford, a walk with a difference as this time ten supporters took time off work to walk 75 miles along the banks of the Oxford Canal from Newbold-On-Avon to Oxford, with a narrow boat following in support acting as floating restaurant and evening hotel.

In 2008 a sponsored walk to Hendon on the last day of the season was organised. There were over 35 walkers and well over £4,000 was raised.

the walk to fisher

In the editorial section at the front of the magazine we wrote that we’d decided not to devote too many words to the Walk to Fisher because so much had already been written in the local newspapers and programme. For the benefit of our many non-Stones readers, we will endeavour to briefly disclose the reasons behind the walk and some of the highlights.

Sometime in late October of last year, Neale Harvey, who travels to Wealdstone matches from Bath, thought of an old fashioned way to raise money in the hope of bringing in some much needed revenue to the bare coffers of Wealdstone Football Club. To be honest. the reaction from many of his closest associates was to scoff at such an outdated method of raising money. How much would the walk actually raise from a home support that had fallen to a mere 300? Was it really worth the effort? Neale’s early estimate was around 30 people to do the walk raising about £600. Within the first day of the walk being announced and after being “apprehended” by Neale, the number had reached forty who would be willing to participate. Inside two weeks the number had  reached over 90! All those registered weren’t going to do the walk. Some had entered their names merely to raise money but not to actually walk the alleged 16 miles to Fisher – more like 20! Ultimately, I believe, that many people were shamed into taking part, after the terrific reaction from so many people – I certainly was.

On the day 74 people actually did the walk, which left Harrow and Wealdstone station at 7.37am. One other person ran the distance leaving around midday, just as the walkers were reaching the Ship Inn in Rotherhithe. The spirit on the walk was incredible. A real feeling of doing ones bit for the Club. Those who did not take part were the real losers as in the years to come they will not have played an integral part in helping the Football Club in its darkest hour. To be honest the walk was pretty easy, except after we stopped for a photocall on London Bridge. The last couple of miles were murder! The atmosphere in the pub was superb. Incredibly emotional as the drinks flowed and singing became more raucous, there was a real camaraderie. I must admit to not recognising quite a few on the walk. There were some real heroes. A couple of gentlemen were pushing 60 but finished the walk without any trouble at all. At the other end, there were those who had just reached their teens. There were the extremely overweight, the undeniably unfit. but only a few cheated -and they seemed the younger and fitter ones! Yes, I did cheat. But my breakfast in a Kenton cafe took longer than expected because of the time it took to cook three bacon rolls and a sausage roll. So my brother and I had to take a cab to catch up. But the worst offenders were the five youngish individuals who took the bus half way down the Edgware Road: sit down Messrs Fall, Lloyd J, Lloyd M: Albert J: and Spicer!

Very few events in Wealdstone history will ever produce a greater day than 5th December 1992. People showed that they wouldn’t let the Club die without a fight.

So far, by the end of January 1993, some £5,000 has been collected. A further £2-2,500 is still outstanding from that pledged. In one of the press reports, it was said that: “only Wealdstone could do something like this” such is the passion in the Club. it is difficult to argue against that.

Above reproduced with the kind permission of the author: 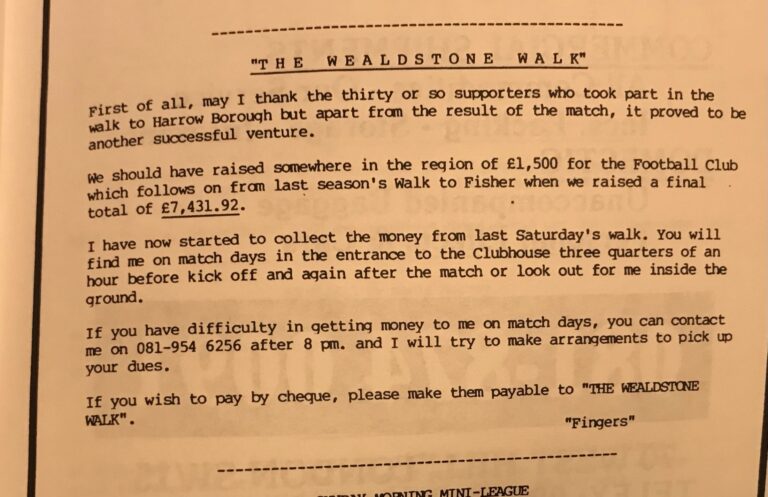